March is Women in Magic Month This is an exciting time in the world of magic. Not too long ago women were seen as magician’s assistants, but they’ve gone from a supporting role to rightfully taking their place at center stage.

You may not know that today’s women in magic owe a debt of gratitude to the great women who preceded them, like Adelaide Hermann.

Adelaide already a popular Vaudeville performer when she met Alexander Herrmann, a French magician known as, “Professor Herrmann” or “Herrmann The Great.”

She’d studied dance and aerial acrobatics and performed a duo act that involved bicycle stunts — quite a novelty in her day. 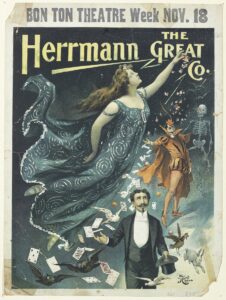 After she married, Adelaide served as Alexander’s partner and onstage assistant for his magnificent show.

Herrmann was a world-famous magician in an era when the only way to gain such fame was by touring the globe, and they did so together until his untimely death in 1896.

Adelaide, then 46 and a talented, resourceful woman, went on to tour the world as the star of her own successful illusion show. She was the only woman to perform the truly dangerous “Bullet Catch” trick and she became known to all as, “The Queen of Magic.”

Adelaide continues to inspire a new generation of women to become magicians.

And this month we are proud to feature some of the very best. Join us by getting your ticket here at; http://philackerly.eventbrite.com