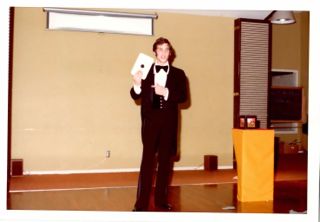 Thirty five years ago, this weekend, I performed my first ‘professional’ magic show. From 1974-1978, I was the magic demonstrator at the House of Humor at the corner of El Camino Real and San Antonio in Los Altos. It was a blast demonstrating and selling magic tricks. I got paid $1.65 an hour. That was minimum wage.

I was shocked when I got my first paycheck and discovered that Uncle Sam kept $.35 for taxes. 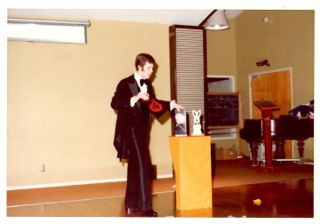 I received a call in October 1978 from the American Legion Post in Palo Alto asking if I would perform at their Christmas Party. I was pretty nervous and wasn’t sure what I should charge. When they asked me what my fee was, I hesitated and stuttered and replied, “Uh, $10?” They said that was fine but they were be able to pay a little more. I went to House of Magic in San Francisco, probably spent over $100. I built my own table, square circle and my own sound. Look at the speakers on the floor. I think I rented a tuxedo from Selix. Mary, a friend from work was my assistant. My parents and sister were there to watch the show. I got bit by the magic bug after that experience and starting visiting the magic shops, buying tricks and magic books. The following year I joined a magic club, and never stopped learning – and spending too! 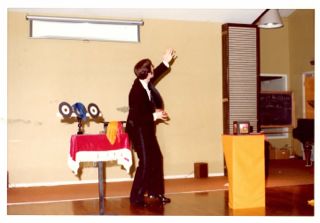 Thirty five years later and I’ve come a long way since my first professional magic show. A lot has changed; the side burns are gone along with the hair on top. Oh yes, my fee has gone up too. How much did they end of paying me that night? Fifteen dollars. But the learning experience was priceless. 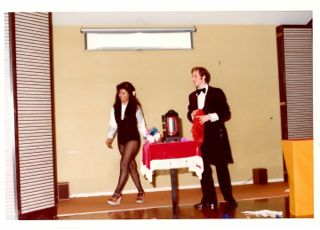