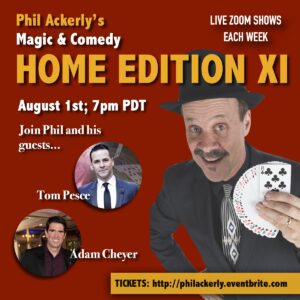 HOT AUGUST NIGHTS – Join us every Saturday in August for the best in entertainment.

GET YOUR TICKETS AT… http://philackerly.eventbrite.com

Phil and his guest, create a night of magic and comedy right in the comfort of your home. One low price gets you access for one device to enjoy the show. Tonight Phil’s guests are…

TOM PESCE Tom is one of the country’s most sought after corporate and motivational entertainers. His long client list includes companies such as Duracell, Asia Bank, Deloitte, Morgan Stanley, Nasdaq, Neuberger Berman, First Trust Portfolios, and more. Tom has toured the country as a headliner for Princess Cruises and regularly performs for some of the most prestigious resorts, theaters, and Fortune 500 companies in the world. Known for combining his unique brand of fast-paced “high-octane” magic with his genuine ability to connect deeply with any audience, Tom has created a visual performance and speaking style that will leave your clients and guests talking about him for years to come. Tom Pesce is a highly skilled performer, speaker, and emcee with over 20 years experience. He has earned multiple graduate degrees in the fields of education, school district administration, and leadership studies. Tom lives in Ridgefield, CT with his wife, Becky, and their three children.

ADAM CHEYER Adam is best known as the co-founder of Siri, the company sold to Apple to build the virtual assistant in all of Apple’s devices. He also co-founded Viv Labs (sold to Samsung to power their Bixby assistant), Sentient (a machine learning company), and was founding member and first developer of Change.org (the world’s largest petition platform with 350M+ members). Adam’s magic isn’t limited to technology startups. He has appeared on Penn and Teller Fool Us, and he coached his 10 year old niece to become the youngest contestant ever to appear on the show. This upcoming season, Adam was a consultant for two of the Fool Us performers, one of them a former FISM world champion who will debut some new technology that Adam helped create. Adam won the Oakland Magic Circle close-up competition last year, he has hosted a weekly magic show featuring some of the top magicians in the world (including Shin Lim, Richard Turner, and Phil Ackerly), and Adam is currently working on producing a new magic-based theater production.

MAGIC & COMEDY – HOME EDITION shows is our way to keep bringing the best in Bay Area Entertainment to you, our loyal fans.  Tickets are online thru Eventbrite and are good for one household access to the show. Ticket sales end 30-min prior to showtime. Get your ticket early to avoid disappointment.  After purchase of ticket, Phil will send you the Zoom Link within 24-hours.  Have questions? Email Phil at phil@MakePhilAppear.com  Or call Phil, he loves to talk to you, 408-781-6735