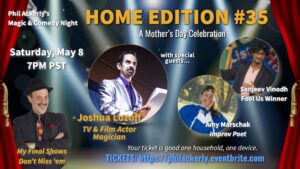 We celebrate Mother’s Day with an exciting show.

Joshua Lozoff – has been studying and sharing magic around the world for twenty years. He regularly performs in theaters and at corporate & private functions throughout the United States and abroad.
Before turning his attention to magic, Joshua was a professional actor, with a notable recurring role on the TV show Cheers, as Gino Tortelli, and as Logan in the movie Clueless. You can even see Joshua’s martial arts prowess on display (he holds a 2nd degree black belt in Aikido) in the film Teenage Mutant Ninja Turtles! See Joshua’s full film and television credits here.

After 14 years as a professional actor, Joshua left Los Angeles to regain his sanity and devote more time to service work, including volunteer stints throughout Latin America. It was during his travels that a chance encounter with a street magician sparked a new passion, and Joshua began his training. Traveling around the world, Joshua studied with master magicians on several continents. After years of full-time training, he began sharing his craft with others. Now Joshua is regarded as one of the top magicians working today. Last year, Joshua logged over 200 private and public performances.

Sanjeev Vinodh – has performed close-up magic for startups, Fortune 500 companies, and national TV. This UC Berkeley student became the youngest magician to fool Penn and Teller on their CW show, Penn & Teller’s Fool Us. In 2020, Sanjeev wrote, “Lost on Track, a virtual show, and shared it with more than 3,000 people over 6 months.

In 2019, he performed at the Magic Castle in Hollywood, an exclusive club featuring only the most unique magicians around the world. And he taught an undergraduate course on magic at UC Berkeley, on how magicians can use linguistics to imply the impossible.

Amy Marschak – Mother’s Day Poet Amy Marschak is bringing laughter and smiles to people virtually and has been doing so for the past year. Before that she has performed her poetry and plays, coast to coast in the United States and Canada, including at the Air Force Academy, Holiday Inn and Aspen A few years ago Santa heard about Poet Amy’s talents and named her Santa’s Official Poet. Her poems create magical moments and all of her poetry is created on the spot as improvisation. She has helped people celebrate birthdays and other important events.

Poet Amy will take requests about some moms in the audience (things mom likes to say or what she has done to make kids feel special and loved) and perform a poem on the spot, celebrating motherhood. All her impromptu poems have rhyme and meter and will get everyone dancing along. She knows how to make Zoom fun and interactive. Yes, it is possible!