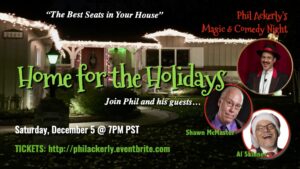 Phil and his special guests join us for another night of virtual magic and comedy. Get all the info and tickets at http://philackerly.eventbrite.com

SHAWN MCMASTER –  Shawn’s unequaled blend of sophisticated magic and hilarious comedy has made him a highly sought-after act all over the world. With his many appearances in theatres, clubs, television (including Masters of Illusion and America’s Got Talent), cruise ships, private engagements, corporate functions, and at the world-famous Magic Castle in Hollywood, CA, Shawn’s ability to blend the astonishing with the absurd has delighted countless audiences both here and abroad. You are sure to enjoy comedy and magic of Shawn McMaster!

AL SKINNER – Corporate magician, Al Skinner brings home the magic and laughs from his home in Sacramento.  We are excited to have Al back on our show again.